Violeta and I returned late last night from the PASA Conference, held at Penn State University from Wednesday to Sunday. We were invited as speakers to talk about creating artisanal gelato using local ingredients. It was an incredible experience, mostly for the fact that the place was teeming with farmers, activists and environmentalists, all interested and directly involved in the local and sustainable movement. We were privileged to be among so many people who are the bedrock of our local farming community, and it felt such an honor to be in a position to help them make their farm operations more profitable and sustainable.

Of course, with the conference being held at Penn State, the first thing we did upon arriving and getting checked in, was to scramble over to the famous Berkey Creamery. I have always heard so much about it and it definitely didn’t disappoint us, even though it was the heavier american ice cream. We are pretty much ice cream sluts over here, to be frank with you, albeit sophisticated ice cream sluts, because, although we like many, we also recognize the good stuff. 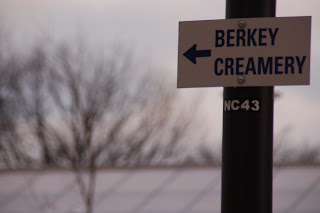